The shocking state of school education in Punjab

Hanuman was a Jat !

At the height of the Ramayan on Indian TV days, a Bengali, a Madrassi and a Jat Sikh argue about ethnicity of Hanuman over a few bottles of country liquor. All were eager to claim this hero of mythology. The Bengali gives an unconvincing argument as does the Madrassi. So unconvincing that I don’t even remember the arguments. Finally the Jat Sikh proudly claimed that Hanuman was a Jat. Asked derisively how he came to that conclusion. He boasted: Kisse di janani, kisse ne chakki. Hanuman ne awdi pooch nu ugg ainwain hee la layi.
Posted by Punjabi Connection at 1:20 PM No comments:

Chandigarh, July 27
Even while Punjab’s GDP is growing at a slow pace compared to certain other big states and its agriculture sector, which is the lifeline of its economy, has been registering sluggish growth for the past few years, the state has got the distinction of having the lowest poverty ratio in its rural areas.

As far as the lowest poverty ratio in the urban areas of the big states is concerned, Punjab figures above Haryana, Kerala, Tamil Nadu, Assam and Himachal Pradesh in the list released by the Planning Commission of India recently.

Obviously, strong fundamentals in the state’s economy, which is otherwise in a sort of crisis, have helped in lowering the poverty ratio in Punjab. In fact, Punjab has recorded a substantial decline in poverty in a period of seven years from 2004-05 to 2011-12. “On the basis of latest figures released by the Planning Commission, the state’s poverty ratio, which was 22.1 per cent in rural areas in 2004-05 has come down to 7.66 per cent. It has come down to 9.24 per cent from 18.7 per cent in urban areas,” said a senior official of the state Planning Board.

As far as per capital expenditure in urban areas is concerned, it is behind a number of states including Haryana, Karnataka, Kerala, Himachal Pradesh and Maharashtra.

Interestingly, while the number of below poverty line families in the state has come down to about 4.6 lakh (considering each family comprises five members), the state government has been giving wheat and pulses at subsidised rates to 15.4 lakh families under the Atta-Dal scheme for which families having per annum income below Rs 30,000 are included.

When the Centre’s food security programme will be launched in the state, about 36 lakh families are expected to be covered under it. The total number of families in the state is in the range of 58 lakh. The state government had recently ordered the addition of at least 1 lakh families to list of Atta-Dal scheme beneficiaries.

A senior official said that it was a good sign that the number of below poverty line families had come down. But that would result in fiscal loss to the state government, he said. “Many grants are given by the Centre to the states under poverty alleviation programmes. Punjab will lose a major part of such grants now,” said the official.

Under Tendulkar Committee methodology, a person whose daily expenditure exceeds Rs 33.33 in an urban area and Rs 27.20 in a rural area is considered above the poverty line.

Mohali, May 18
Girls outshone boys in the humanities and commerce streams while the science group witnessed a boy grabbing the top slot in the Class XII Punjab School Education Board (PSEB) examination, the results of which were declared today. Interestingly, 19 girls have made it to the top-20 league of the overall merit list of all streams.

In the science stream, Davinder Pal Singh (95.78 per cent) of DC Collegiate Senior Secondary School, Jalandhar City, secured the top position. He remained at the fifth position in the overall merit list.

In the commerce group, Tammana Sharma of Dashmesh Senior Secondary School, Ludhiana, grabbed the top slot with 94.67 per cent marks. She remained 10th in the overall merit list.

The second and third slots in all the three streams have also gone to girls.

While declaring the results, Education Minister Sikandar Singh Maluka emphasised that there still was a lot of scope for improvement. "Our overall pass percentage this year (78.97 per cent) is better than last year's 72.31 per cent. We will strive towards improving our score," said Maluka.

However, he expressed happiness over students of rural areas and government schools showing better results than that the previous years.

"This year, the overall pass percentage of rural students is 78 per cent, which is slightly lesser than that of urban students (79.66 per cent)," said Maluka. He said the pass percentage stood quite low at 70.28 per cent in 2011. He also said students could apply for rechecking within 10 days.

Ludhiana all the way


Posted by Punjabi Connection at 11:45 AM No comments:

4. All 20 districts except Mansa and Bhatinda have seen improvements in the sex ratio. For Bathinda, the ratio declined from 870 in 2001 to 865. Mansa registered no change and the sex ratio remained at 880. Taran Taran has the lowest sex ratio at 819. Nawanshehar, Jalandhar, and Kapurthala had the highest improvements with sex ratios of 879, 874 and 872 respectively.

6. Ludhiana is the most populous district with a population of 34.87 lakhs. Barnala had the lowest population, just over 5 lakhs.

Posted by Punjabi Connection at 7:30 AM No comments:

Labels: Population Census 2011 Punjab Ludhiana Taran Taran Mohali Bathinda Mansa Muktsar Sex Ratio Literacy Population Density
CENSUS 2012: Overview of Literacy in Punjab 70.23% Punjabis in rural areas still illiterate The literacy rate has increased from 69.65 in the last Census to 76.68 in 2011. Of the total number of illiterates, 70.23 per cent are in rural areas. Nearly one-third of the illiterate rural population is concentrated in the border districts of Ferozepur, Amritsar, Gurdaspur and Tarn Taran. Ludhiana has the highest number of illiterates in urban areas (almost one in every five persons).
Posted by Punjabi Connection at 3:35 AM No comments:

Labels: CENSUS 2012 Punjab India Lietracy Amritsar, Gurdaspur, Taran Taran Ludhiana
CENSUS 2012: Punjab Gender Ratios- why are ratios in urban areas worse than rural areas? The gender ratio (893) in the state has increased by 48 points as compared to the last Census (845). It is 906 in rural areas and 872 among the urban population. Hoshiarpur has the highest gender ratio of 974 in the rural settings, followed by Mohali (962) and Jalandhar (951). In urban areas, Mohali has the highest sex ratio of 924. At 837, Fatehgarh Sahib has the lowest gender ratio in urban areas, with Gurdaspur one position up at 848.
Posted by Punjabi Connection at 3:34 AM No comments: 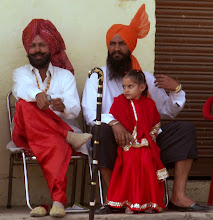